When I feel that chill, smell the fresh cut grass

I am so happy September is here. Like really happy. Not that I wish away any month because I try not to do that. However, I am a Fall type of gal. I like the cooler temps, I like the thought of summer closing it’s doors, windows open, gorgeous colors, apple picking, denim and boots. My crock-pot takes over from the grill and it is just really one of my most favorite months of the year.

All great reasons to love the fall, right? But there’s one more. Football.

Football has been a part of my life as a mom for 12 years. It’s been a passion of this family, something we have lived and loved since my oldest was in first grade. Out of default and no one else willing to take on the position plus the fact that his father was willing to spend the extra time on footwork with him, CJ started as a quarterback way back then and is finishing his high school career as a QB. My tiniest football player is now 5’11”, 185 lbs as a sophomore in high school and my Jax started playing as a Tiny Mite when he was five years old. Rob has been equally blessed and cursed with being a coach for them both and to this day continues to assistant coach on a team where we have no dog in the fight. Twelve years later. Same game. Same boys that despite their size are boys in my eyes. Same man there on their sidelines. My Boys of Fall. 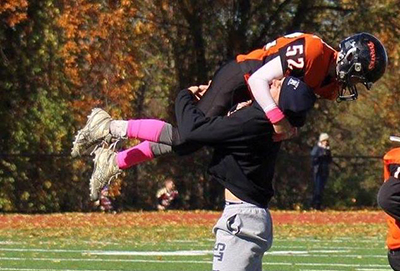 I'm back in my helmet, cleats and shoulder pads

My Rob has always said that coaching football had little to do with teaching them about the game of football. In his eyes, football was more about teaching them how to be good men. And where the lesson was lost on a few, many benefited from years of playing football. The proof is in the pudding, in the good men they are at 18. There are so many great life lessons to be learned from football - I just highlighted my 8 most favorite.

1. A good handshake is important

The art of shaking hands is one that you don’t see as much as you used to with young adults. And there is something so vital about the ritual of standing, addressing someone and shaking their hand. I have had more football players in my house over the course of the past twelve years than I could count and I had one rule: when Coach Schu got home, y’all stop what you are doing and go shake his hand. And when you leave, you find him and shake his hand and thank him for having you. And they never broke that rule.

2. Find the lesson in the loss

In life there is going to be loss. Loss of friends, loss of relationships, loss of jobs, loss of life. Find the lesson in the loss. Learn from it. Not that there were not losses that they took on the chin and hurt but it also caused them to go back to the drawing board. Never once was it a blame game on the other team, the refs, the conditions. Face loss head on and learn. 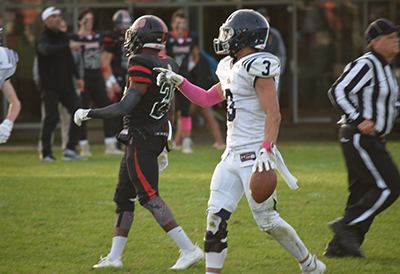 Standing in the huddle, listening to the call

Snaps are missed, passes are dropped, tackles slip by. Appointments are forgotten, we speak before we think, we make mistakes. Be accountable for your actions. Carry your weight, do your part and be ready to own it if you don’t.

Each season stood for something, some motto. And it was different every year. When you stand for something, it means something. It gives you a mission, a purpose, a reason why and that driving force can make all the difference - not just on the field but in life itself.

5. There is no substitute for hard work

You can be the most talented athlete in the world, a master at your profession. But if you don’t put in the work, the grueling, back-breaking, hard work behind the scenes - you won’t be the best for long. Because it’s when you’re tired, when you’re weary and you have one last report to turn in, one last sprint, one last rep, rewrite that article for the umpteenth time to get it right - that’s what is character building. That’s what gives you the advantage.  There will never be a substitute for the grind. 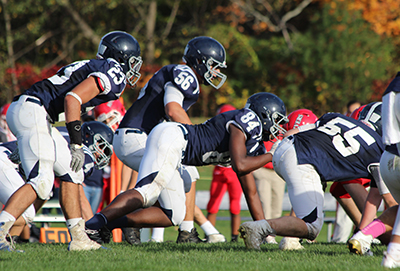 Fans going crazy for the boys of fall

In life as in football, to achieve great things you must be disciplined enough to do the things that need to be done. To grind. To make the right choices when there is a buffet of easier, better tasting, more fun options in front of you. If doing the right thing was the easy thing than high achievers would be a dime a dozen in this world. Whether it’s academics, athletics, professional life, family life - a major difference between the haves and the have-nots is their discipline.

Lead by example. You want good friends in your life? Be a good friend. You want teammates that will give 110% each and every play? Be that teammate. Be the person that you want to be surrounded by. Bring out the best in others by showing them the best in yourself. Be the person that you would want to follow, that would inspire you to give more when you have nothing left to give. There is a profound difference between telling people what to do and motivating them to give you all they have. And then some. Know that difference. 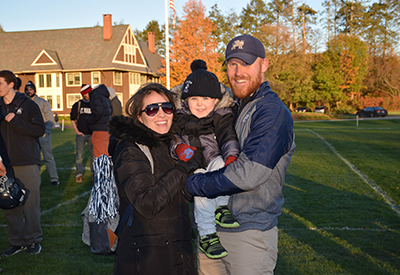 There are times to lead and there are times to follow. A good leader is open to the ideas of others and realizes that there is value in the ideas of others. No leader is going to be effective if they first don’t know how to follow, how to be motivated, how to work through adversity as a part of a whole. That goes for not just football but at work and at home. You cannot be a good leader if you don’t know how to be a good follower.

As I said earlier, this season will be the cherry on top of 12 years of playing football for my oldest son. He was selected as a captain for his senior year, one of four men that were put in a position of leadership, an honor. With a little luck, this post will fall into the hands of all four captains of the St. Marks 2018 Lions as I wanted to give them each a little something going into the season. And because I can - what better way than to dedicate the remainder of this post to them.  So to those four captains, this is my gift to you. 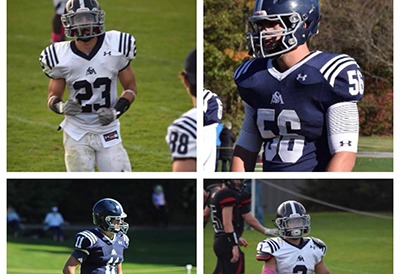 When your back's against the wall

Lead from the top down.

Whatever you ask of your team be certain that you are already giving that yourself. And then some.

Your actions on and off the field are a direct reflection of your team.

Be the good men that you are whether it’s in the dining hall or behind closed doors. Petty disagreements, disparaging talk about other players - don’t engage in it and don’t tolerate it.

You mess with one man

Be the first ones to practice and the last ones to leave.

Let your faces be the first your team sees when they walk on the field, in the weight room, come through that door for film. And the last hands they shake as they are leaving.

Find that player that feels defeated, that is struggling and build them up.

Be aware of your teammates and what they need. Seek out the ones that are struggling, that are feeling a disconnect and bring them into the fold. You are only as strong as your weakest player and the more connected you are the better the team dynamic. 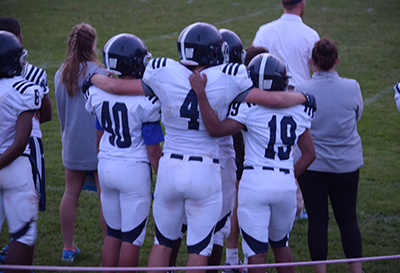 You got us all

There are going to be dropped passes, interceptions, missed tackles. Let it go. Pick up a piece of the grass, the turf in the huddle, toss it in the air and let it go. Your ability to let it go or not is going to dictate the team’s ability to do so OR not do so. Be the type of leader that once a play is over you move on to the next one.

I don’t care if it’s a handshake, the way you enter the field, a song you listen to before you go on the field. As a team, create some sort of ritual, some sort of bond, something that when every player on the 2018 St. Marks Lions looks back on, they remember and smile. It seems silly but trust me when I tell you it’s not. 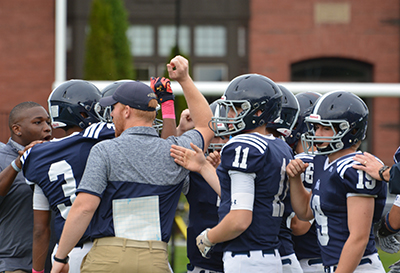 The Boys of Fall

Be the bigger man.

Things will happen on the field. The other team may be dirty, words will be exchanged, y’all know what I’m talking about. Don’t engage. Be the team that other teams look at and say, “What a group of gentlemen.” Maybe the other teams won't use the word gentlemen but I guarantee you the fans on the sidelines will.  Because that matters.

Leave a legacy you can be proud of.

Wins and losses matter. I won’t tell you they don’t because winning is always more fun than losing. But when you are all out living your lives and you look back on your final high school season, what your teammates are not going to remember is the season record but the way you made them feel as individuals. As teammates. What is the legacy, the mark that you want to leave? How do you want to be remembered? As individuals? As leaders? As a core group of captains? How you impact your team this year - whether positively or negatively - that’s going to be your legacy that you leave. Make sure that you’re leaving behind exactly what you intended. 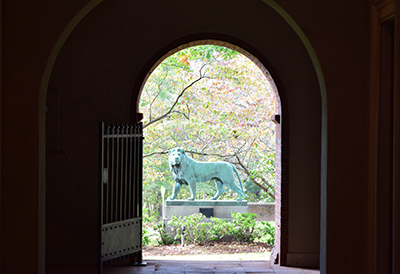 Do and Be Your Best

Be the man in the arena.

Theodore Roosevelt wrote a great speech called the “Citizenship in a Republic” and there is a passage in the speech about being the man in the arena. And in that part of the speech he wrote, “The credit belongs to the man who is actually in the arena, whose face is marred by dust and sweat and blood; who strives valiantly; who errs and who comes short again and again…who at the best knows in the end the triumph of high achievement, and who at the worst, if he fails, at least fails while daring greatly…” Be the men in the arena. Give this season, your team the very best of you have. Dare to be great.  Every play. Every practice. Every game. On and off the field.

There are few sports that encompass the passion of football. It’s a game I love, a game that has so much meaning to me. I couldn’t have a conversation with you about two point conversions or off-sides or anything of that nature - at least not an in-depth conversation. But I can tell you that it has been a game changer for my boys. It has taught them respect, loyalty, discipline. It has grounded them, defeated them and allowed them to triumph. It has given them friends that have been in the trenches with them, introduced them to the grind and probably caused me more anxiety, more breath holding, jumping up and down screaming like a maniac amazing moments.

Wishing the 2018 SM Lions a season that surpasses expectations. And to my Jax, go get some! I have no doubt you will not only be a valued member of the team but a welcome addition to the Seawolf community! I can’t wait to watch you soar! 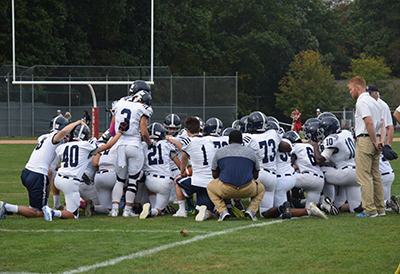 Best of luck to all the Boys of Fall out there! It goes by fast - enjoy every moment!