I grew up very close to my grandmother. She was without question one of the wisest women I’ve ever known and had a knack for knowing what to say and when to say it. And she used to say to me often, “Life is a journey, Hallie.” And that particular phrase has stuck with me through all of my life and it’s a phrase I fall back on during times of trouble, times of uncertainty and times of sadness. And it’s a phrase that I live when I see the changes that take place in my family and in my personal life.

I have a close friend whose journey has been so much different than mine and learning her story has been impactful. Eye-opening. Humbling. Inspiring. And during a time in our world where as a whole I think we are lacking cohesiveness, togetherness, understanding of one another - I think her story is a reminder of how much one person can change a life and how it is the journey itself that defines us. And she was gracious enough to share it with me so that I could share it with all of you. And maybe, just maybe, her story will touch one person and make a positive impact on their journey.

Angie’s mom was 19 when Angie was born and given that she was born on December 26, was arguably the best Christmas gift her mother had ever received. Angie’s mom would tell you that Angie was not an ‘oops’ - she was very much planned and hoped for and the bond between mother and daughter was strong from the get-go. She was Angie’s person and Angie was hers - Mother and Daughter against the world. 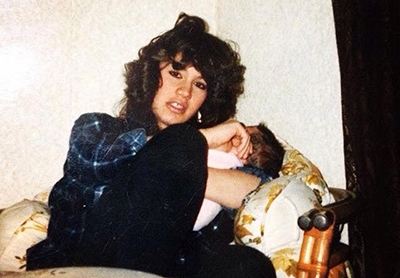 She traveled this road as a child

Angie’s parents separated early on and her mom met the man whom would take on an important parental role in Angie's life. Her brother, Jimmy, was born when Angie was almost 7 and despite the age difference, the siblings were always close. There was a lot of laughter and a lot of love in the early years and the bond between mother and daughter remained strong. 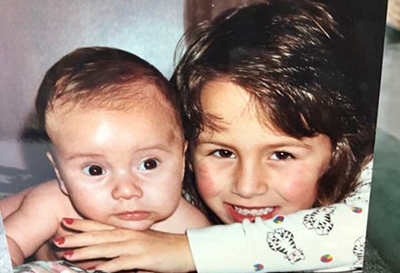 As with all journeys, there are also bumps in the road. Angie’s mom struggled with addiction and what she called her ‘inner demons’ and this over time impacted the quality of their relationship as well as the quality of life they led. Eventually, the addiction had an overwhelming effect on the family as a whole and Angie, Jimmy and their mom moved in with their grandmother around the time Angie was in sixth grade. This impacted the relationship between mother and daughter as the addiction prevented Angie’s mom from being a parental figure and the two became more like friends and, at times, with Angie taking on the role of parent to her mom. 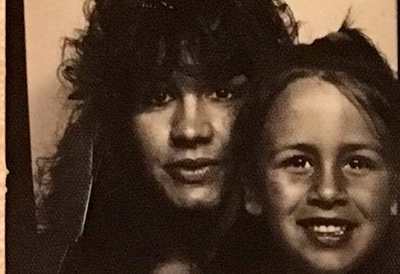 If these are life's lessons, she'll take this test

Angie spoke of her mom with such love but also such resolution - very much the situation ‘is what it is’. Despite the challenges with addiction, the realities of a broken home and the burden of having to grow up too soon, Angie will tell you her mom was ‘her person’ in the early years. Her love of life, her smile that lit up a room, the passionate way in which she lived her life were instilled in her daughter from day one. And those lessons resonate with Angie still and were the greatest gifts her mom graced her with.

Journeys have a way of continuing regardless of whether or not we want them to and Angie’s journey was no different. Angie met her second person when she was in sixth grade. A Language Arts teacher by the name of Mrs. Baker (Heather) took Angie under her wing and gave her a haven from the struggles and reality of home.

Over the course of the next three years, Heather would continue to keep in touch with Angie’s progress personally and academically. When Angie was a freshman in high school, her mom died of a drug overdose in January and the following December, her grandmother died after a fall. Angie moved in with her godmother, Karen, (whom she lovingly calls her Fairy Godmother Kammy) after the loss of her grandmother and finished out her sophomore year. She then moved in with Heather and her husband at the start of junior year of high school and remained with them for the next few years. 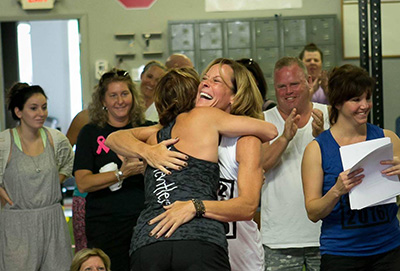 There was a lot of anger when her mom died. Understandably. But more so Angie was lost. Heartbroken beyond measure. And what Heather offered her was a fresh start. A clean slate. A sense of family. A new school, new friends. A new Angie. It was never about forgetting her past but more so honoring her early years, on the many positive and not so positive lessons and using that knowledge to start a new chapter - a much needed breath of fresh air. And Angie was grateful and relieved to be able to begin anew, to take those next steps on her journey. 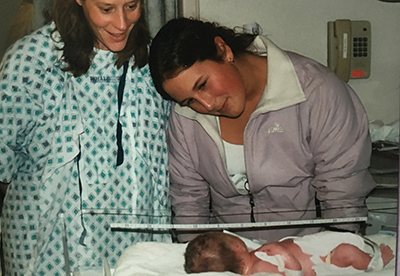 Room to make her big mistakes

Angie told me that her mom had such high regard, such gratitude for Heather. She told Angie that no matter what happened, she hoped that Heather would always be a part of Angie’s life. I cry writing this thinking that although she was in the grips of addiction, Angie’s mom had such awareness to the woman that Heather was and the impact she had on Angie’s life. And such grace to give her blessing to the relationship. 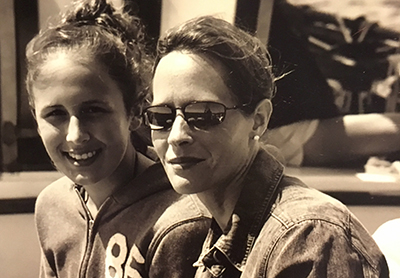 Often times the ‘person’ in our life changes due to circumstance, due to loss, due to life. Because of the journey. And Heather was placed in Angie’s path at a time when she was desperately needed and went from teacher to mentor to caregiver to friend. Angie quotes a line from the movie Stepmom “I was her past and you are her future” and told me, “That is what I lived.” Despite being in the midst of starting a family of her own, Heather welcomed Angie with arms wide open and that humanity, that stability, that accountability, that selflessness - it has never been lost on Angie.

Angie got her own place and struck out on her own in her early 20’s. Her next person would come to her on a whim, on a woof if you will. It was Mother’s Day, a day that she dreaded yearly. She went out to just ‘look’ at some puppies as she lived in an apartment that did not accept animals. She fell in love with a beautiful boxer boy whom coincidentally shared the same birthday as her mom. Serendipitous one might say. She paid for him then and there despite not being able to afford it and it was one of the best decisions she ever made. 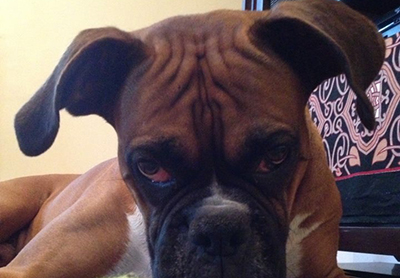 She knows the high stakes

Deklin became Angie’s everything. Her hiking buddy, her Starbucks purveyor, he was her passenger seat rider and her partner in crime. They were a package deal. He was a constant in her life, her judgement free zone, her lifeline and her lifeboat. Deklin not only saw Angie through some of her darkest days of living alone and trying to figure it out but he also brought her the light, the joy. And I believe that that light, that joy was his greatest gift and his purpose in her life. He was her person. 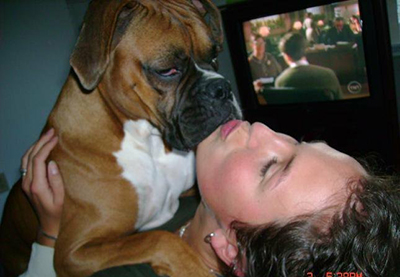 Who doesn't know what I'm talking about

For the first time in Angie’s life, she had responsibility to someone other than herself. Forced her to step outside herself and care for someone else when she so badly needed someone to care for. This responsibility for someone completely dependent on her helped her to thrive in her independence. She lost Deklin to a seizure disorder almost two years ago. More loss in a life filled with loss and heartache.

The impact of the loss shook Angie to her core. I remember vividly the day she had to let him go and the profound grief she had. And the days and the months afterward where you weren’t sure if you could bring up Deklin’s name but she so needed to know he wasn’t forgotten. Life and time don’t wait for anyone and with both of them there is healing and acceptance. Angie is finally starting to talk about MAYBE another dog and this relationship will be different. No longer needed out of desperation for needing someone to love but more out of inspiration for sharing the love she has to give.

A lot of loss. A lot of heartache. Too much for one person to withstand. But that is the journey. And throughout the journey that Angie has been on, she has had a constant, a person that has gotten her through each stage. From her Mom to Heather to her Deklin, that ‘person’ has been a driving force, a guide through her journey. And that’s a wonderful thing. But now what? Who becomes her person now? Well…Angie becomes her own person. Strong. Independent. Willful. Purposeful. 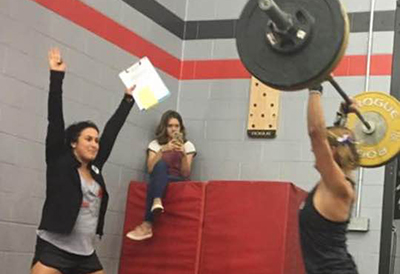 Angie could have easily gone a different route, taken a different path. She chose not to be defined by her circumstances but rather allowed the adversity to give her the opportunity to rise above and write her own story. I will also tell you there were countless people that impacted her life - a godmother, aunts, cousins, friends.  And this story is not to take anything away from the part that they played nor to minimize their involvement nor to take away her gratitude for the village that helped her to get where she is today.

Life is a journey just as my grandmother said. It’s about leaning on those in times of need, getting guidance to help navigate through the darker days. Hopeful to find the light, the joy, the laughter, our purpose. And finally reaching the point where we can say - I’m okay. I got this. On my own.

I want to thank Angie for sharing with me and, in turn, allowing me to share with all of you. She was very candid and so honest and I had to fight back the tears while she talked. While I was so grateful for her sharing, I was so broken inside for what she lived, for parts of her journey, for her loss. And incredibly proud. So proud of her triumphs, so humbled by what she has accomplished, what she has fought for, what she has done. With her ‘persons’. And now - all on her own. Well done, Ang. Well done. 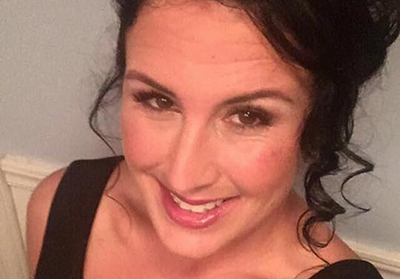 To find a dream and a life of their own

A place in the clouds, A foundation of stone.