Mid-May already…I honestly can’t believe it.  I swear it was just yesterday that I turned the calendar over and yet here we are on the downhill stretch of the month.  I love the month of May and I’ll be honest - May of 2019 has fallen a little short of my expectations of flower planting... 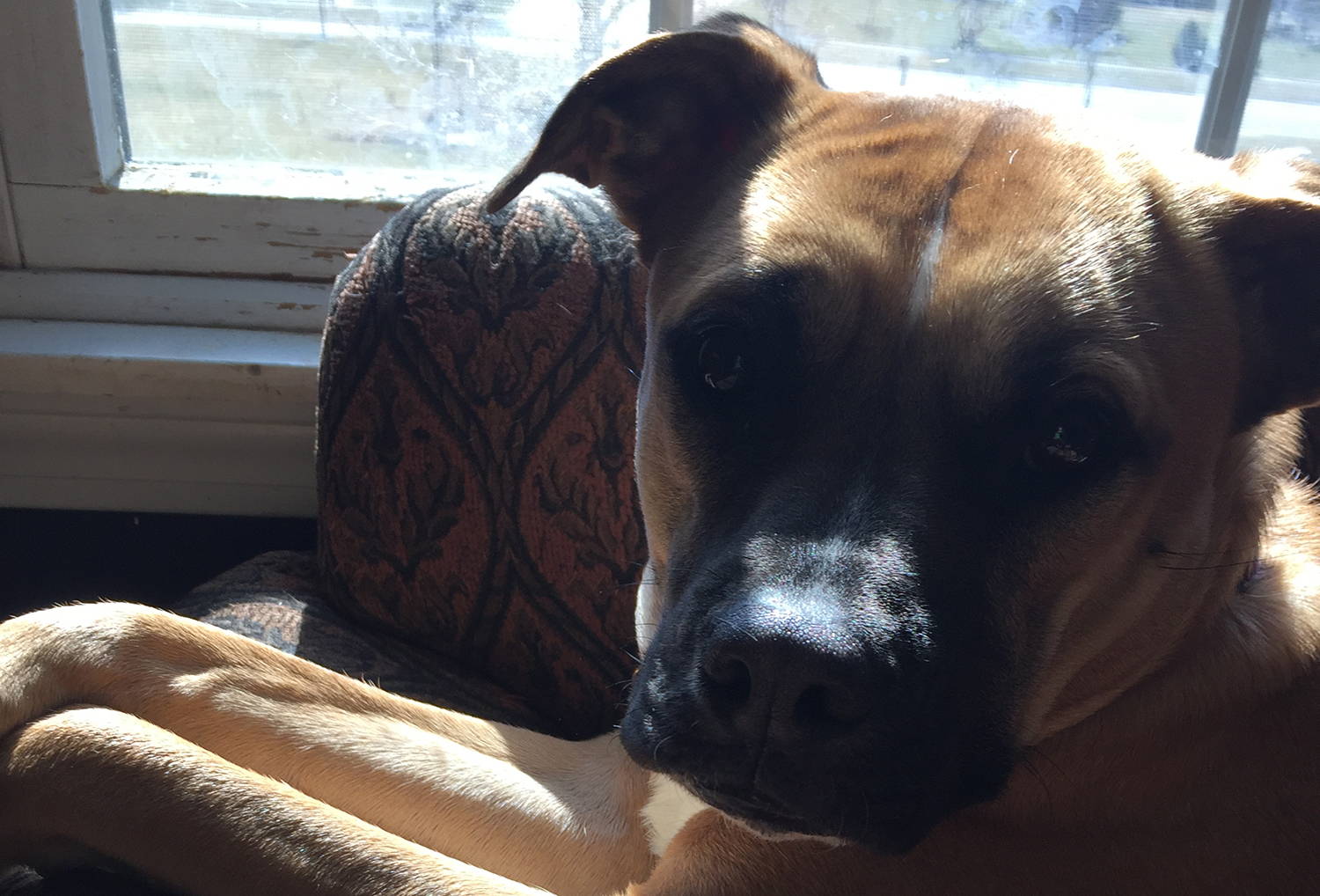 It Has Been An Honor

Mid-May already…I honestly can’t believe it.  I swear it was just yesterday that I turned the calendar over and yet here we are on the downhill stretch of the month.  I love the month of May and I’ll be honest - May of 2019 has fallen a little short of my expectations of flower planting, getting some color on my pasty white Irish skin, nights spent out in the front yard watching the dogs play and sipping a Tito’s with my Rob.  But I remain ever optimistic that there are warmer, sunnier, brighter days in the future.  Cheers to that!

I had originally planned to write about kids coming home from school and how as parents and caregivers we endure the change to our routine.  And how are little gooses can endure their introduction back into rules and chores and being a part of the family.  And that will come at a later point in time.  But not today.

I’ve said it before that having the opportunity to tell someone’s story is pretty awesome.  A gift for someone such as myself.  And I have had many an opportunity to take someone’s story and string some words together and give voice to what they’ve been through.  Breathe life into their journey in a way so that we all hopefully take a little something away from it that makes us better people.  And this story - well, I hope it does the same.

This is the story of our Honor.

Where It All Started 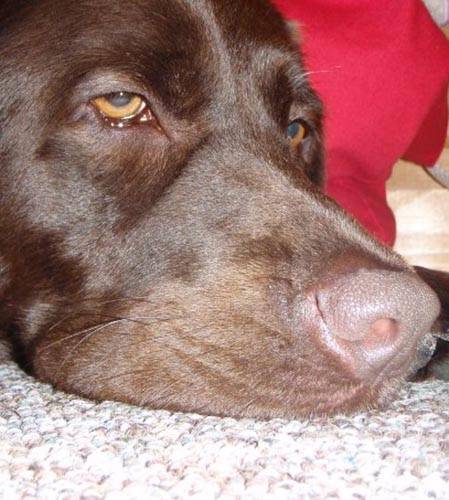 We had a beautiful chocolate lab named Harley.  Harley was legit the best dog in the world.  I had bought her from a breeder in Montana in July of 2004 during a rough patch in my life, a time when everything was falling apart.  And Harley, well she put Humpty Dumpty Hallie back together again.  And then some.  She was a much loved member of the family, a safe place for each of us to land.

Harley started having seizures in December of 2014.  By March of 2015, they were at the point where her quality of life was impacted and we were told it was time to let her go.  On March 28, 2015, I took Harley in by myself and feeding her cookies one at a time, with my forehead on hers, I said good-bye to my girl.  Thanked her for putting us back together again and for choosing me that hot July day.

We started looking for a puppy near the end of April.  We decided that we wanted to rescue if at all possible.  I happened upon an organization in New Hampshire that had puppies.  The puppies were born on Easter Sunday to a mom by the name of Lilly.  The owners had decided to sell the puppies at a yard sale when they were three weeks old for $25 apiece.  This amazing organization was able to not only save the puppies but also the mom.  We submitted our application for ‘Breeze’ and began the countdown to Memorial Day weekend when the puppies would make their way up from Tennessee. 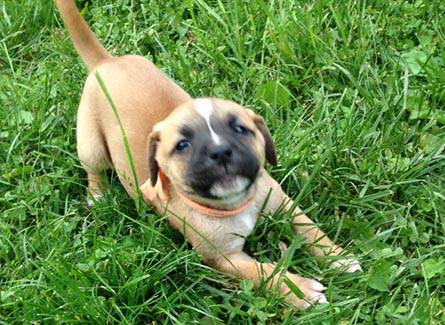 As a family of five very strong opinionated individuals, coming up with a name was near impossible.  We settled on the name Honor because as a family, it is a word that holds significant personal meaning to us.  As I was leaving to go get Honor, CJ says to me, “Please bring home two puppies.”  For like the 500th time.  I finally said out of exasperation that the only way I would bring home two puppies is if one of them hadn’t been spoken for.

Meet Honor.  And her sister Murphy.  Be careful what you promise when you’re exasperated. 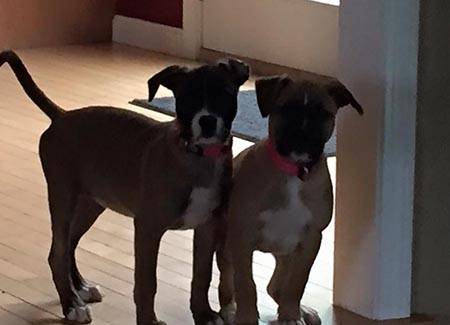 The girls settled in relatively quickly.  Impossible to potty train, they were definitely their own little pack.  Our house was nonstop WWE Wrestling and everything they did, they did with gusto.  They became the darlings of the house and where you found one, you always found the other.  They were much loved members of the family and we were introduced to a new chaotic normal.  And we embraced it.

There were some challenges.  We noticed some food aggression after about two years and modified feeding.  Everyone had their own personal space and was given time to eat and then settle after eating.  Honor was often anxious, barking at anything and anyone that came near the house.  People walking dogs and bikes and the UPS man in particular could send her into a frenzy.  What we learned after the fact is that this is called trigger stacking and for dogs like Honor, can lead to them feeling even more anxious.  At times threatened.  Virtually impossible for a dog to control, it can put them immediately into survival mode.

In February 2019, I had left to do a quick errand and was gone maybe 30 minutes.  I came home to an eerily quiet house.  With four dogs, you are always greeted by a chorus of barks.  Nothing.  One of the dogs had had an accident which was highly unusual.  Things were out of sorts.  Long story short, something had triggered Honor and she had been lying with Gunner when I left.  Honor and Murphy both showed signs of having been in a fight.  Gunner was in shock and in very bad shape.  Rob and I were with him later that afternoon and held him in our laps when he took his last breath.  And our hearts weren’t just broken - they were shattered. 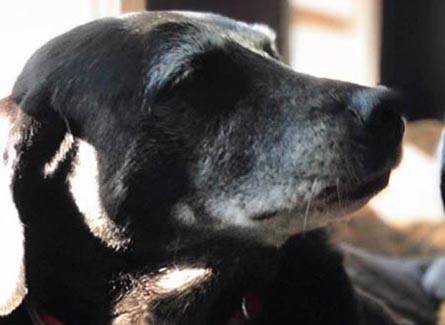 What do you do?  The situation was awful.  We spoke at length with the vet about dog aggression and she asked us to give it some time, work with her and pursue different avenues.  We spoke with the kids and it’s amazing the grace and compassion and kindness they showed after having a loss of their own.  As a family, we forgave the girls because in our hearts we believe they weren’t bad girls.  They were being animals. 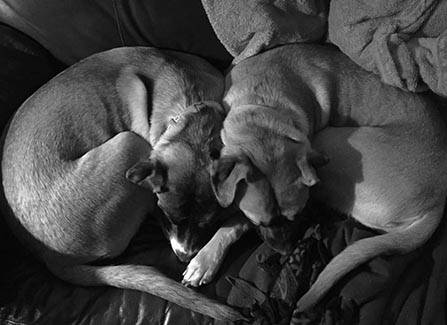 We moved forward with a plan.  We tried various treatments with Honor, reassurance tactics and training.  Removed her from situations that could trigger stack her into survival mode.  Tried CBD oil to aid in keeping her calm and not stressed or anxious.  Spoke with multiple vets, dog behaviorists and handlers.  If there was something out there for us to try, we were willing.

A month ago, Honor had that look after eating her breakfast.  I don’t know what exactly rubbed her the wrong way but all of us in the family knew that particular look.  Rob was still home at the time and went to walk her to her crate and she instantly was snarling and upset.  As he walked Honor by Murphy, she lunged at her.  Murphy lunged back and Armageddon unleashed in my kitchen.  Rob was finally able to get them apart and put them in separate crates.  Murphy was bleeding, I was crying, Rob was trying to simply collect himself.

We spoke with four different vets and explained the situation of the past month and a half in detail.  I called three different rescue organizations - just as recently as yesterday.  Anything that could possibly be done to save her we would be willing to do.  At the end of the day, the decision was unanimous with every professional and volunteer that I spoke with.  That we had to make a choice that was in Honor’s best interest.  And we sat crying amidst the broken pieces of our hearts. 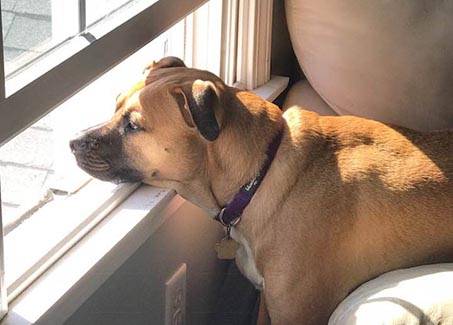 Today we said good-bye to our girl.  She was only four years old.  When I tell you it is one of the hardest decisions we’ve ever had to make, it is not an understatement.  I know in my heart we did all we could to not have this be the end result.  But in no way does that make walking in that door this morning any easier.  She is laid to rest with the rest of our dogs.  And a little piece of each of us went with her.

All of our animals touch our hearts.  And share their life lessons with us.  And Honor was no exception. 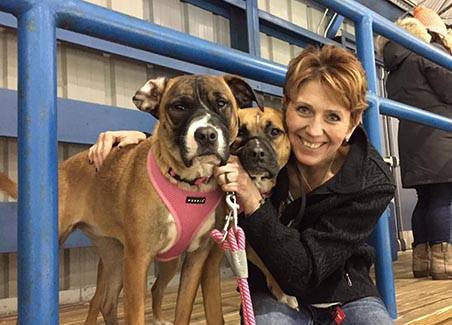 One thing about Honor is that she was loyal to her family.  She loved them beyond measure and was very protective of her tribe.  And I so get and appreciate that.

Sharing is not always caring. 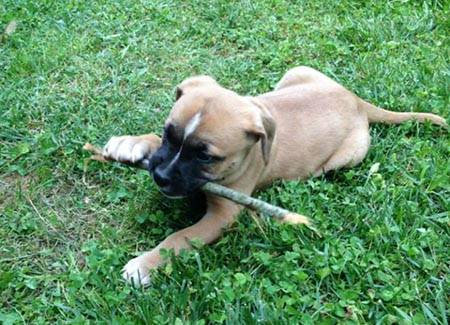 Sometimes we don’t want to share.  Sometimes we want what we want and we want it just for ourselves.  And every now and again - that is okay.

Whenever Rob or one of the kids would come in the door from being gone, Honor would get the wiggles.  And would whine.  And go get a tennis ball to gift to them.  She let you know with her whole self that she loved you and missed you.

Time-outs are a good thing. 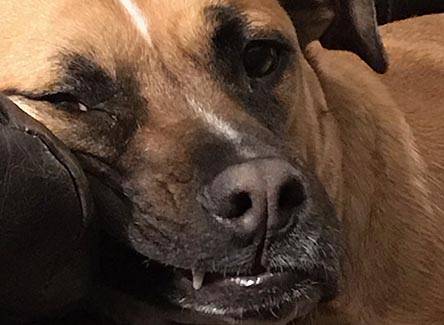 There were times that Honor had to be put in a ‘time-out’.  Given space to let the bad mood go away.  And being put in a time-out to cool our jets is good for all of us every now and again. 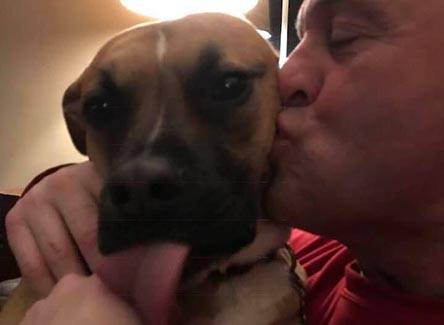 Because we did.  And we would all over again.

The story we tell is not always one of perfection.  It is often full of amazing moments, family memories and tragedies.  Laughter and tears.  And hard choices that no one should have to make but sometimes circumstance dictates that you have to.  It makes me ever mindful that sometimes what we see as sad or unfortunate as an outsider looking in - really gives you no insight to the tragedy that has taken place.  The why that got them to the where they are now.  And that the journey of others is not up to us to judge…but rather to approach from the perspective of compassion and understanding.  Because I would have rather anything than THIS day in my journey. 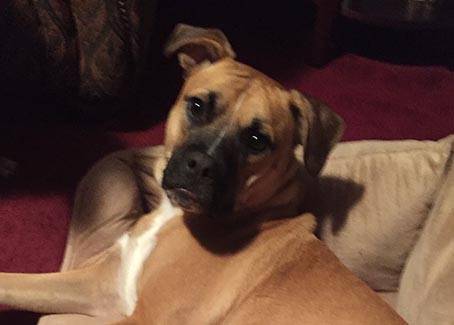 I will miss her.  The house is a little empty and so is my heart.  I hope that she knows that we made the decision that we did in her best interest, what is right for her.  Because she was a good girl.  A good dog.  And I didn’t want her to be put in a situation where she felt any less than exactly that. 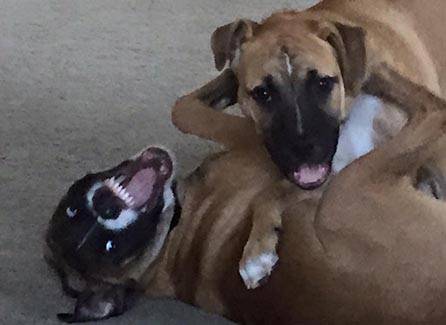 It was an honor to be your Momeez, Boom Girl.  I will miss you and promise to take good care of Daddy and Lexi and the boys.  I have no doubt that Gunner was the first to welcome you over the Rainbow Bridge and that there was no need to ask for forgiveness…he forgave you that very day.

Gone does not mean forgotten...Til we meet again… 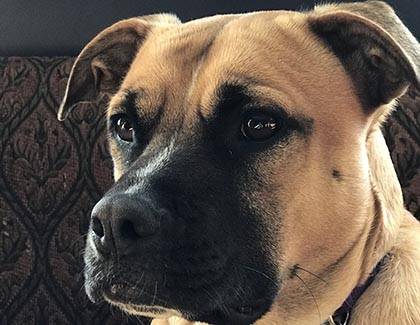